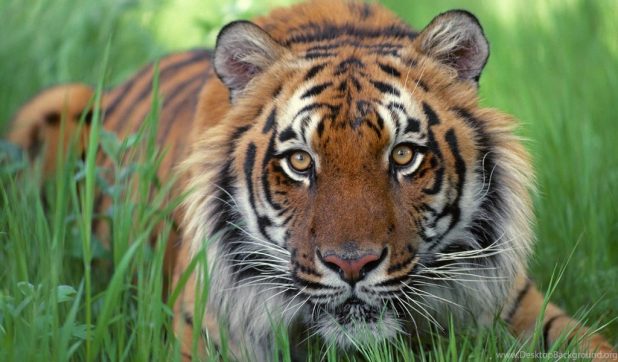 In European culture, the lion is called the king of beasts. In Asia, the cult of the tiger has developed since ancient times – a strong, fearless and ferocious animal, commanding all representatives of the kingdom of animals. Accordingly, the tiger is considered a symbol of royal omnipotence and military prowess.

Despite all the respect for striped predators, the Asian peoples, not without the effective help of Europeans, were very successful in destroying tigers, reducing their number to several thousand. But even having remained in an extremely small number to preserve the population, tigers have not become less dangerous. Attacks on people have not completely gone away, they just became less. Such is the paradox: people have completely banned the hunting of tigers, and tigers continue to hunt people. Let’s get to know the Asian version of the king of beasts closer:

1. Tigers, jaguars, leopards and lions together make up the genus of panthers. And panthers as a separate species do not exist – they are simply black individuals, most often jaguars or leopards.

2. All four representatives of the panther genus are very similar, but tigers appeared before all. It was more than 2 million years ago.

3. The weight of a tiger can reach 320 kg. According to this indicator, among predators, the tiger is second only to bears.

4. Stripes on a tiger’s skin are like papillary lines on a human’s fingers – they are purely individual and are not repeated in other individuals. If a tiger is shaved bald, the fur will grow back with the same pattern.

5. Tigers are unpretentious to natural conditions – they can live in the tropics and savannah, in the northern taiga and semi-desert, on the plain and in the mountains. But now tigers live only in Asia.

6. There are six species of living tigers, three extinct and two fossils.

7. The main enemy of tigers – Human. For two million years, tigers have bred in not the most favorable natural conditions, but they may not survive a collision with a person. First tigers were killed by hunters, then tigers began to disappear due to changes in the natural environment. For example, in Indonesia, only on the island of Borneo, 2 hectares of forest are cut down every minute. Tigers (and their food) simply have nowhere to live, because for a comfortable stay of a female, 20 square meters are required. km., and the male – from 60. Now tigers are close to extinction – there are only a few thousand left for all six species.

8. Tigers easily interbreed with lions, and the offspring depend on the sex of the parents. If a lion acts as a father, the offspring grows into three-meter awesome giants. They are called ligers.

9. In addition to the usual yellow-black color, tigers can be gold, white, smoky black or smoky blue. All shades – the result of mutations after crossing different types of tigers.

10. White tigers – not albinos. This is evidenced by the presence of black stripes on the wool.

11. All tigers swim well, regardless of the water temperature, and those living in the south also regularly arrange water procedures.

12. Tigers do not have married couples – the business of the male is limited to conception.

13. In about 100 days, the female bears 2 – 4 cubs, which he brings up on his own. Any male, including the father, can easily eat the cubs, so sometimes the female has a hard time.

14. Tiger hunting – this is a long stay in ambush or crawling towards the victim and a lightning-fast death throw. Tigers do not lead long chases, but during an attack they can reach speeds of up to 60 km/h and jump 10 meters.

15. The power of the jaws and the size of the teeth (up to 8 cm) allow tigers to inflict fatal injuries on their victims with almost one blow.

16. Despite all the caution, swiftness and power of the predator, a small proportion of – animals in the habitats of tigers are very cautious and shy. Therefore, having caught the prey, the tiger can immediately eat 20 – 30 kg of meat.

17. Stories about tigers becoming cannibals after they have tasted human flesh seem to be exaggerated, but man-eating tigers do exist, with dozens of people on the sad account of some of them. Most likely, man-eating tigers are attracted to people by relative slowness and weakness.

18. The loud roar of the tiger – this is communication with fellow tribesmen or a female. Be wary of the necessary low, barely audible growl. It speaks of preparing for an attack. Some scientists believe that it even has a paralyzing effect on small animals.

19. Despite the fact that tigers are predatory animals, they are happy to eat plant foods, especially fruits, to replenish their vitamin reserves.

20. The average bear is usually larger than the average tiger, but the striped predator almost always emerges victorious from the duel. A tiger can even imitate a bear’s growl for bait.

22. Tigers live in the most densely populated part of the planet, so they really sometimes turned into a disaster. In Korea and China, tiger hunters were a highly privileged section of society. Later, striped predators were actively destroyed by the British colonialists in the territory of present-day India, Burma and Pakistan. For hunters, the fact of victory over a formidable animal was important – neither the meat nor the skin of the tiger has commercial value. Only a tiger skin by the fireplace or a scarecrow in the hall of a British castle are valuable.

23. In the early 21st century, British hunter Jim Corbett killed 19 man-eating tigers and 14 leopards in 21 years. According to his theory, tigers became cannibals as a result of injuries received from unsuccessful hunters.

24. In the United States alone, up to 12,000 tigers live as pets in families. At the same time, laws allow keeping domestic tigers only in 31 states.

25. The Chinese believe in the healing effect on the human body of drugs made from absolutely all organs and parts of the tiger, including even the whiskers. The authorities with such stimulation of the killing of tigers are fighting hard: any “tiger” medicine is prohibited, and tiger hunting is punishable by death.